I don't know why, but there are an awful lot of Germans in New Zealand, and I mean an awful lot. If you just assume every tourist that you see is German you will have a staggeringly high success rate, and, like I say, I really don't know why. I noticed it on my first night in New Zealand when, of the three other guests that I spoke to at the hostel, all of them were German. By the time I got to the third I asked about this, and she, like every German I've discussed it with since then, both admitted that it was true and was as surprised to find it to be the case as I was. I know how disappointed by this you will all be, but it seems that this mystery must remain unsolved.

On the 6th of January I arrived on the South Island and picked up a white Toyota Corola. My holiday since that time has been significantly affected by the fact that I can now just drive places.

Obviously I needed to get some tunes for the car, so I stopped by a record store and picked up a copy of Lorde's album. I mean, I'm in New Zealand - it was either that or the Lord of the Rings soundtrack. And they didn't have that. I checked. I also happened to notice The Sunset Tree by The Mountain Goats and, in a fit of nostalgia for my university days, bought it. Fucking waste of twenty dollars, I tell you what.

When you're on your own with a car, there is a terrible temptation to just drive, like, all the time. There's no one else with you getting bored or antsy in the back seat, and the thought required for driving is just enough to occupy the mind but not, on the empty highways of the South Island, enough to tax it. You just cruise along the highway, through mountains and along coasts, looking at the scenery and kind of zoning out. Until, in the middle of fucking nowhere, on this practically empty highway through the mountains, there's a set of traffic lights, and you're not really paying attention and you brake too late and gently rear end the guy in front of you who, fortunately, is also driving a rental so isn't all that angry that you just hit his car, just wants to get your details so you can pay him back if he gets charged for any damage. He was German, by the way, as were the two hitchhikers he'd picked up who were riding with him. My own hitchhiker sampling, by the way, yielded three Germans, two Austrians, and an American. I'm counting the Austrians as German.

Every significant journey I've taken so far seems to have taken at least twice what the Google maps estimate says it will, largely due to the fact that it's difficult to drive fast and without stopping when the road you're driving along is like this: 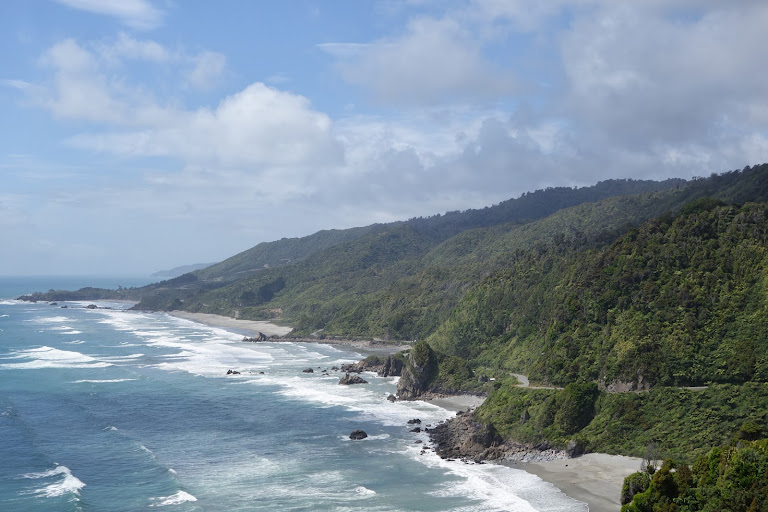 New Zealand really is set up fantastically for hiking and camping, with the Department of Conservation managing the facilities for both. There are DOC campsites all over the place that will be in beautiful locations and provide, at minimum, toilets and a water supply (potable, if you're lucky) for between free and £3. They do a few fancier and more expensive ones as well, but I rarely had cause to visit those. On the hiking side, practically every five minutes along the road there will be a turn off signposted for some attraction, and if you go down it you'll probably find at least one walking route with an estimated return trip time specified. The big draw for both activities are the Great Walks, which are a set of 9 multi-day hiking routes (or tramping, as they say in NZ) through particularly beautiful scenery of various kinds, with DOC campsites and huts along the way. Sadly, due to time constraints I was unable to do a Great Walk in full, but I did do a little bit of a couple, sampling the coastal charms of the Abel Tasman Track... 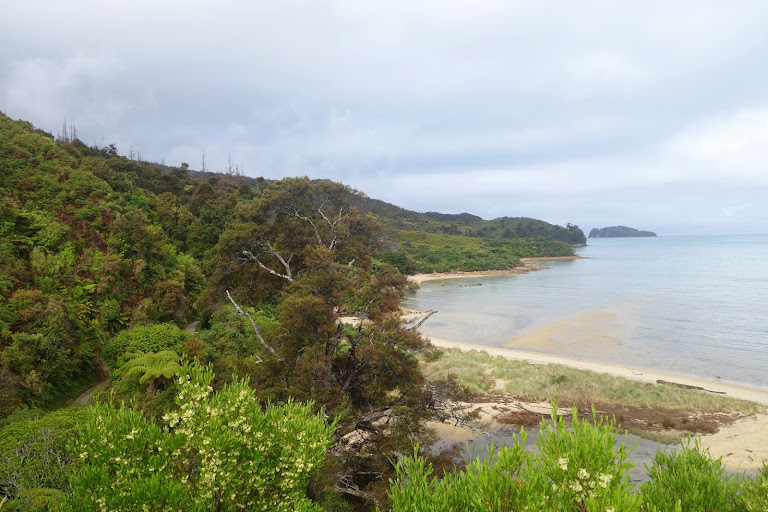 ...and the alpine magnificence of the Routeburn Track. 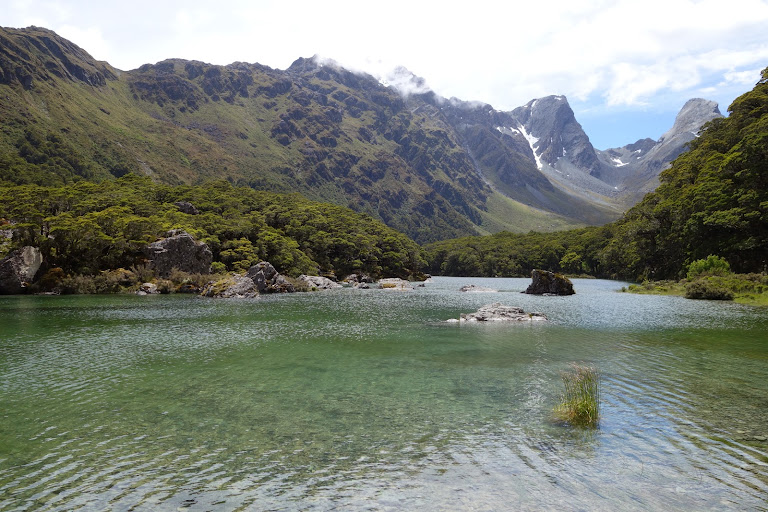 I've had pretty decent weather for most of my time here, marred slightly by the wet and windy last couple of days, and a very wet day when I was supposed to be taking a look around glacier country. I did actually make the trip out to view the Franz Josef glacier and ended up getting soaked to the skin. I was not happy. 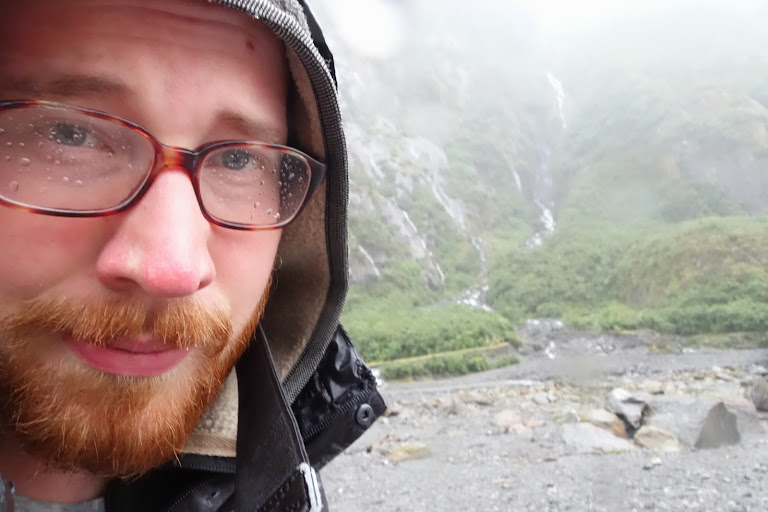 The low visibility meant that I couldn't even see the glacier very well, but the rain did contribute to the rather impressive waterfalls in the glacier valley. 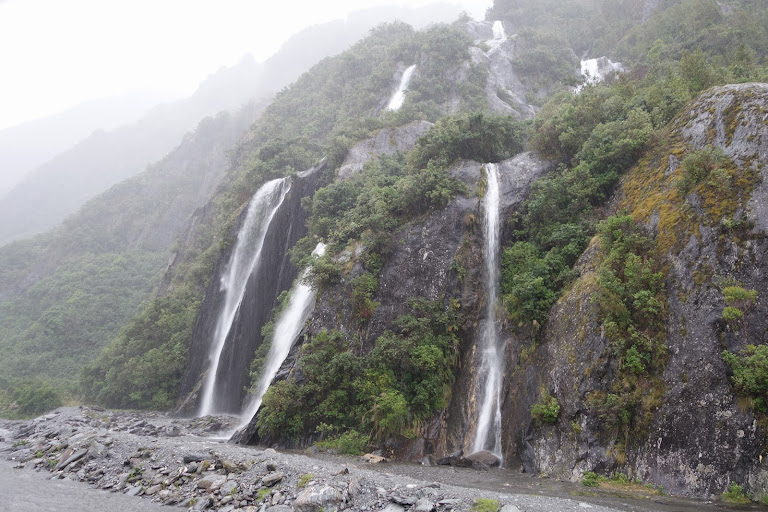 I made up for the miserablness of my previous glacier viewing experience with a walk to the Rob Roy glacier near Wanaka a couple of days later, which, well...I mean just look at this shit. 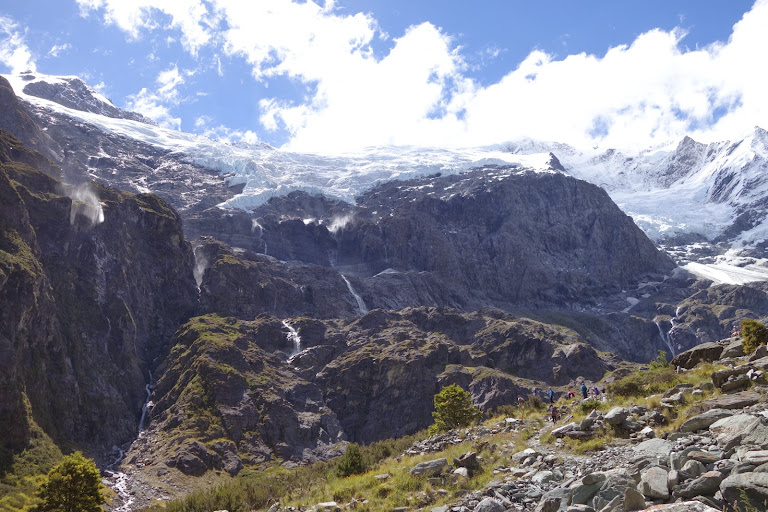 After driving across the top, down the west, through the middle, and along the bottom, camping and tramping all the way, I reached Dunedin, where I checked into a hostel and had my first shower in four days (longer if you don't count a bath in a lake). Dunedin is apparently the Edinburgh of the South; considering that Edinburgh is the Athens of the North, I'm not quite sure how that all shakes out in the end. Anyway, from there I took a plane to Auckland and thence to Rarotonga, in the Cook Islands, where it is mostly raining.

Picton/Nelson
Abel Tasman
Takaka Hill/Golden Bay
Lake Rotorua/Buller Gorge/Tauranga Bay
The West Coast
This is as far as I've gotten with uploading pictures - stupid countries where you don't get complimentary, unlimited WiFi at every establishment as standard have been slowing me down.